Since nonplayercat is frantically busy preparing for Day of the Devs tomorrow, I’ll be covering some of what we have (read: she has) been working on since our last big update in September:

One important thing I should mention first is that we’ll soon be changing the name of the game. There are a bunch of boring reasons for this, but suffice it to say, it’s not something we’re looking forward to. Thankfully we’re not too far along for it to be a big setback, so as long as you’ll all stick by us, we’ll be fine!

We introduced the concept of Moblet clubs that the player can join. Each one has a unique personality to it, and whichever one you join at the start of the game will determine which starter moblet you get (and possibly other things!).

Here are some of the clubs we have come up with already:

We didn’t really have any cohesive environments before, but now we’ve got the player’s home region, Badgetown. It has the player’s house, farm, a town square, seed shop, some clubhouses, and a boardwalk. 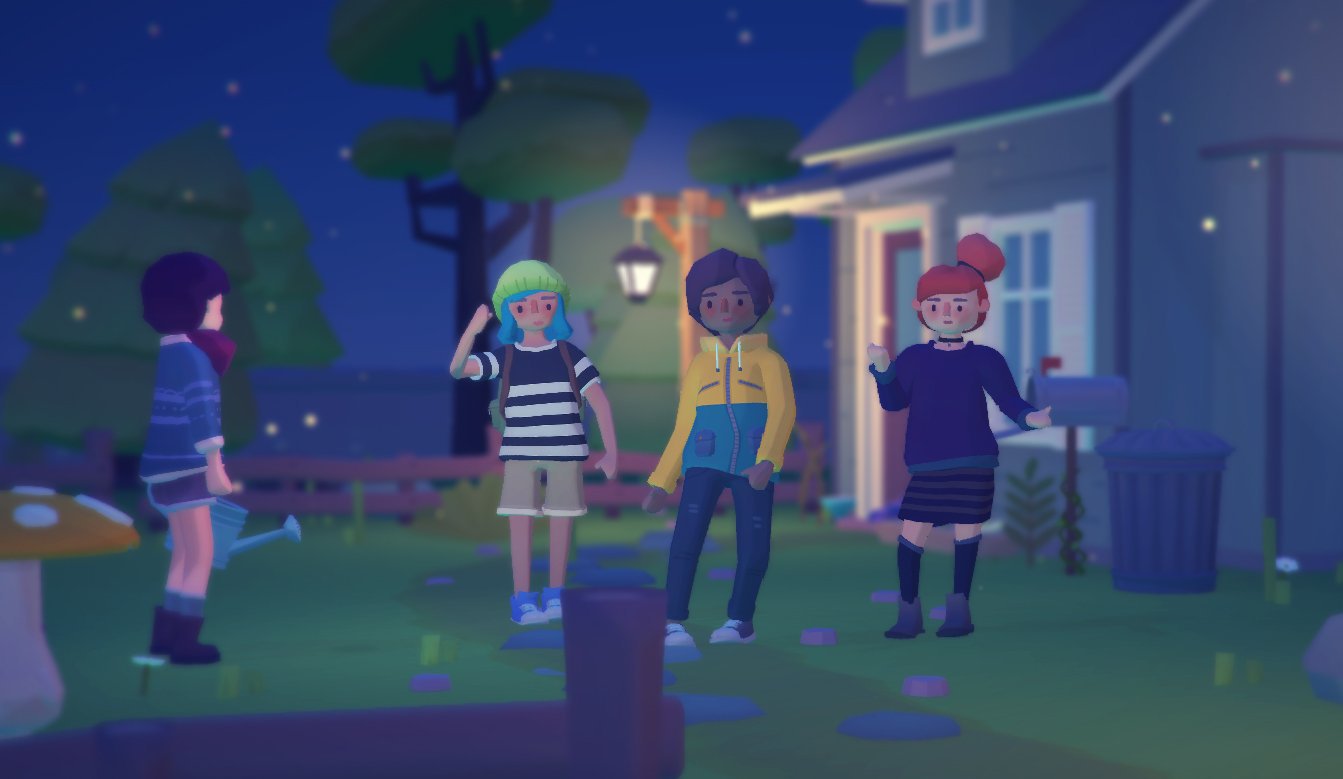 There are more new characters than I can keep track of. Here’s one of our favorites, Esley:

Moblets and characters can now wear all sorts of hats, glasses, and other stuff. We’re hoping to make accessories have some in-game modifier mechanics eventually.

This is the biggest thing nonplayercat has been working on. We wanted the first playable build to show off what players might reasonably experience at the start of the game, including stuff like cutscenes and scripted interactions.

This involved adding and improving a bunch of core game systems like combat, adding moblets to your crew, encounters, dialog trees, etc.

It turns out that a big part of creature collection games is the collecting part, so that’s now been added! After you defeat a wild moblet, you’ll have an opportunity to befriend it by offering it friendfruit. If you have enough, it will join your crew. 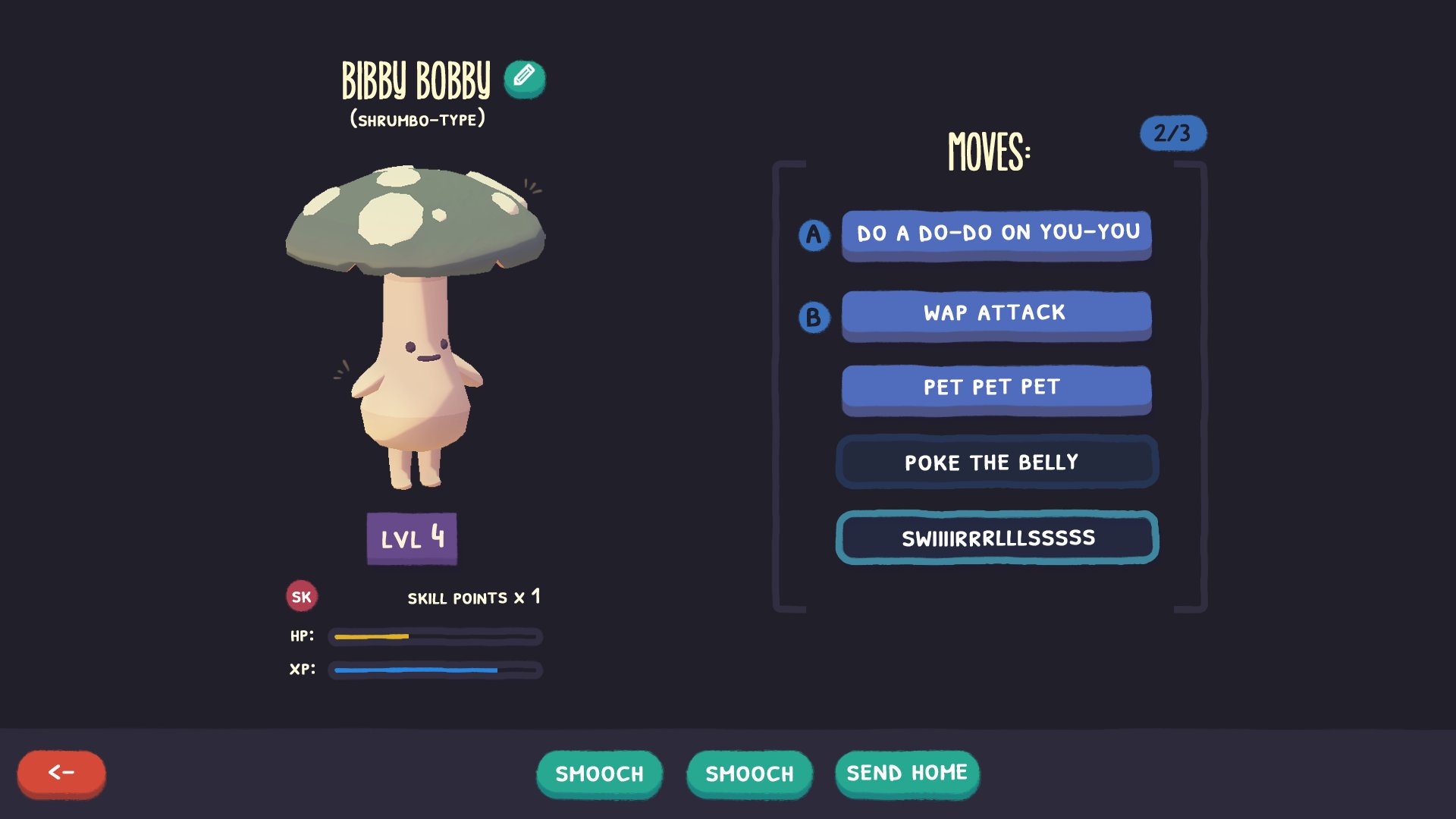 As you use your moblets in battle, they gain experience points that can let them level up. Once you’ve leveled up a moblet, you’ll be able to buy new moves for them to use. These will cost various combinations of things you produce on your farm.

The first website for Moblets was pretty much just a single page of HTML but I’ve been wanting to make something a bit meatier and integrated with a blog, so I did a bit of research into the state of blogging platforms in 2016. It turns out it’s pretty much the same as it’s been for the past decade.

Our original goal was to keep the devlog on our Tumblr but the gif size limit was driving us nuts. Couple that with the lack of real control over the site, and I began looking into Wordpress, but hosting it myself and keeping it secure and not a resource hog was unappealing. Similarly, I had no intention of getting into the seedy world of shared Wordpress hosting. 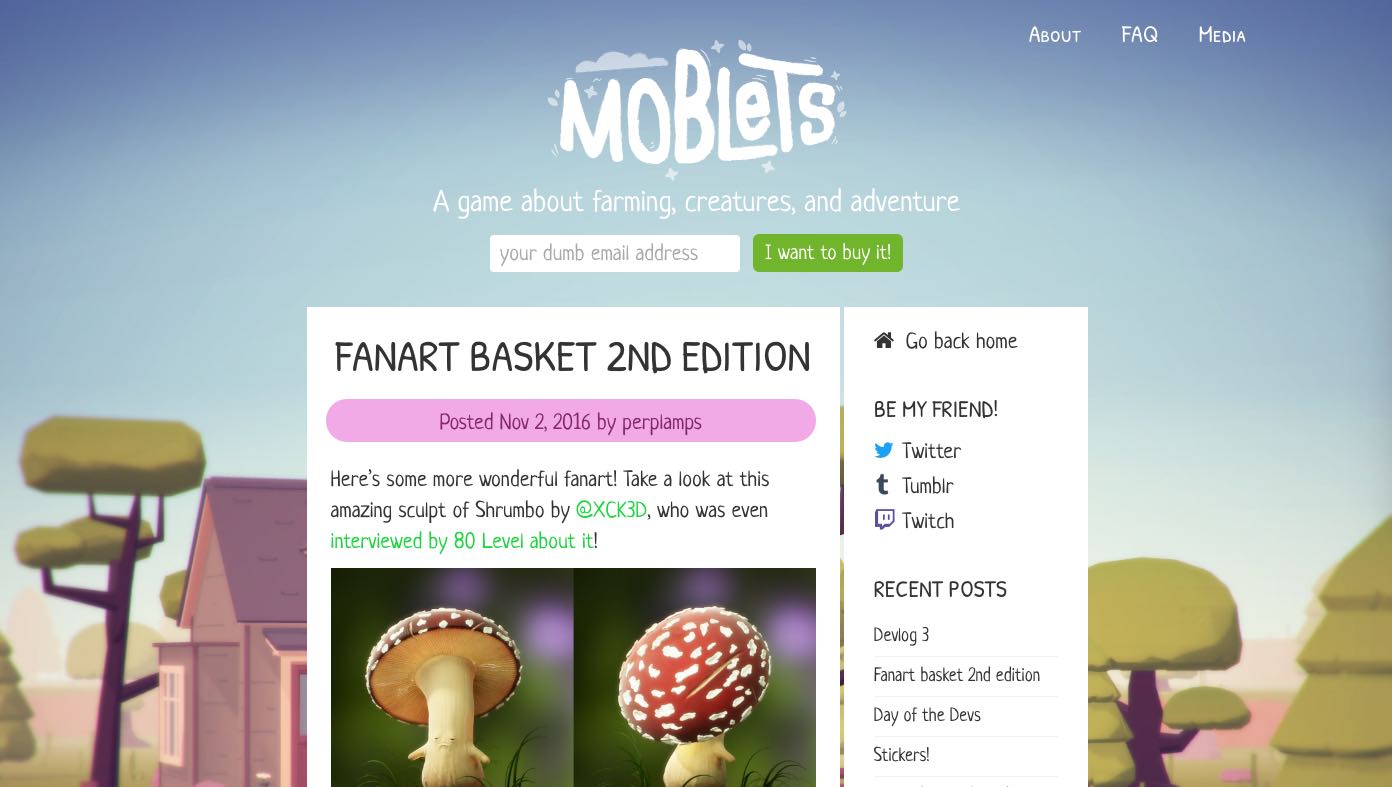 Instead I’ve found what I think is a really great platform between Hugo (a static site generator) and Firebase (hosting). If anyone is interested in more of what that all involves, let me know and I can maybe write a long boring post about it.

nonplayercat continues to build an amazing community on Twitter. At the time of this writing, she’s up to like 8,700 very awesome followers. That’s up from 50 in April of this year! I’ve also started tweeting a bit more, but I’m still pretty close to 50 🙇

I’m a little concerned for the future of Twitter given its financial predicament and the unceremonious shuttering of Vine recently, so I’m trying to get us to diversify a bit more, which leads us to: 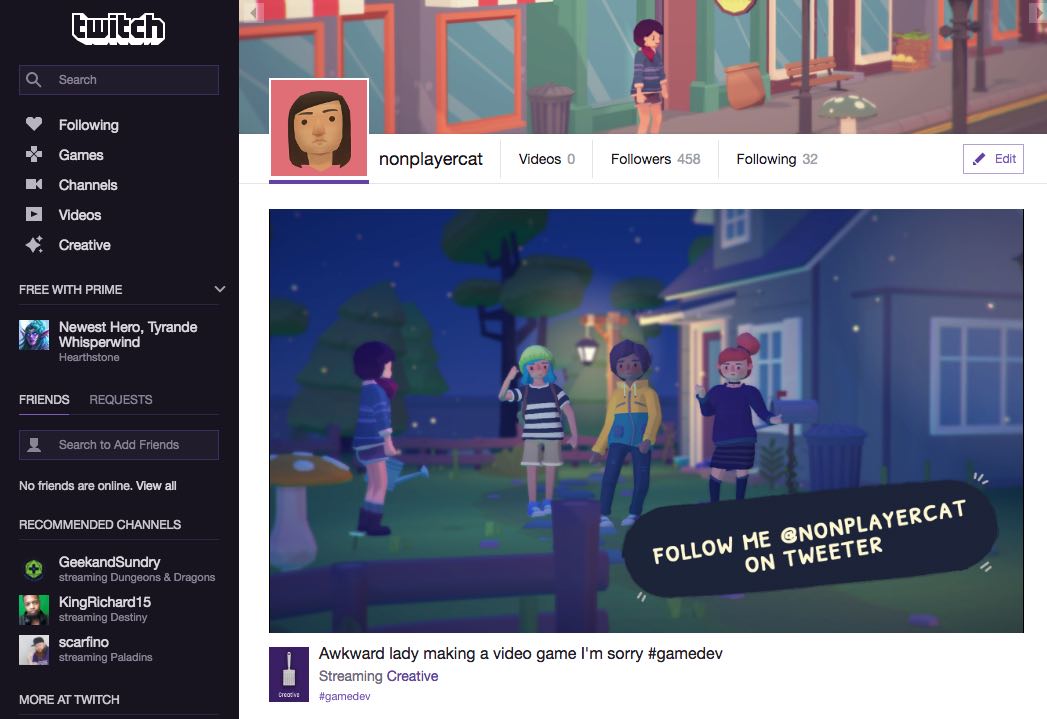 First, if you’re not already, you should follow nonplayercat’s Twitch channel.

After about the third person jokingly suggesting that she was secretly a huge development team all pretending to be one person, nonplayercat started feeling a bit worried that people might actually believe she wasn’t doing the programming and art for Moblets herself. She figured a good way to fix this was to show herself making the game live.

We were expecting a handful of people to be interested, but her first broadcast pulled in over 100 concurrent viewers. We’ve done a few more since then and while it’s still pretty stressful to work in front of an audience, I think it’s a really good platform for us to build a community in.

Day of the Devs

We’re actually letting humans outside of our small apartment play a really early build of the game in San Francisco on November 5. I can’t make the trip, but nonplayercat will be there to show it off. She’s honestly pretty terrified that everyone will hate it but I know they won’t. Regardless of how playable it is right now, I think it represents a really impressive achievement for only four months of work.

Also, she’ll be giving out the stickers we got printed! They’ll probably run out fast!

Once nonplayercat gets back from Day of the Devs, we’re going to slow down a bit to try to get some foundational aspects of the game right. That means things like building a better framework for the creatures, supporting localization, setting up data structures for saving, as well as thinking through and testing more of the gameplay mechanics.

P.S. It turns out I write really long devlogs