Devlog 5: A pretty good one I think

This month has been a bit less focused on visual assets and more focused on core gameplay systems. Here’s what we worked on:

Wait, you don’t want to lose your farm and all your ooblets every time you quit the game? Ugh, fine…

You don’t really think about how complicated saving a game can be until you need to implement it. With all the weird data relating to farm tiles, plant statuses, ooblet stats, NPC positions, and so on, it gets hairy pretty quickly.

We picked up the Easy Save plugin, and while I wouldn’t call the whole process “easy”, I did manage to get it sorted out!

Working with controllers is… interesting. If you’re under the impression that buttons would pretty much be mapped the same way across different controllers, you’d be sadly mistaken. You need to come up with a different button layout profile for every controller out there.

We ended up getting the Rewired plugin to help. There’s still a lot of other work that’s required in switching a game from mouse and keyboard to controller, like every UI panel navigation, so the controller support work never really ends. That said, everything that’s currently in the game can be controlled with a controller!

Part of the difficulty in controller support or keyboard-only controls is that some interactions become difficult without a mouse. The big one we ran into was farming, where being able to select the tile you want is kind of important. Since Ooblets uses variable character rotation, we needed to come up with a system that would not make planting a seed or tilling a needle-threading experience.

We solved this by shifting the camera to be more top-down and the character controls more tile-based when you’re in your farm. Your character now rotates to precise tile directions so you can easily select the thing you want to.

To provide a bit more farming gameplay, we added the concept of weeds that can slow down plant growth and potentially destroy your crops if you let them get out of hand. Weeds will randomly sprout around your farm and will each spawn more weeds nearby if left unchecked.

No more soulless empty expressions on everyone’s faces! NPCs, ooblets, and your player character can now emote. NPCs move their mouths when they talk and ooblets will express different reactions during battles. 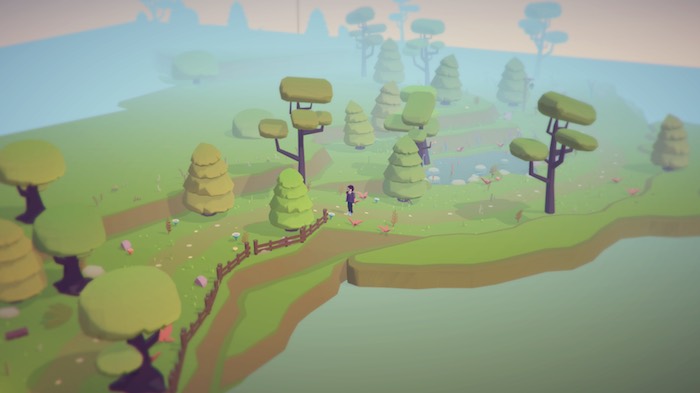 Like we mentioned in the last devlog, we changed the structure of the game to be a bit more linear in the adventuring department. This is accomplished by organizing the regions into trails you travel through to get to each next region. We’re nearly finished with the first trail, which we’re tentatively calling the “Leaving Badgetown Trail” (we should probably work on that name). At the end of this trail, you’ll have to battle your first real Ooblet master to gain access to Mamoonia, which we’ll have to rebuild in trail format.

First rule of game dev: It’s not a real game until you can play dress up in it. This one was a pretty big technical achievement which we wrote about at length in a Patreon post so I won’t try to get bogged down with it again here!

You can now find little gifties lying around the environment that contain various goodies.

The Patreon is going super well and continues to amaze me. It’s been about a month since we started it and we’ve already reached over $1,000/m. We’ve shared a bunch of desktop wallpapers, a Slime Girls music track from the game, behind-the-scenes peeksies, a few gamedev guides, and some top tier cat gifs.

Just joining the $1/m tier is a really good way to get Ooblets updates emailed to you in case you don’t check Twitter all the time.

This is the one thing I can’t be totally open about despite REALLY wanting to blab about all the exciting stuff that’s happening. Suffice it to say, a lot of big big things are going to be announced very soon…

What I can say is that we finally announced our studio, it’s called Glumberland, and we set up a website for it that turned out way better than I could have hoped, thanks to the amazing work of Dina Norlund and Kay Lousberg. Check it out: glumberland.com

We’ve mentioned it a couple times already, but we’re going to be showing off Ooblets at GDC! It’s the first GDC Ben and I have ever been to, so we’re verrrry excited (and terrified). I’ve been working overtime to get a fresh build ready, so if you’re coming, make sure to find us!

If you’ve read through this whole post then I’d imagine you’re probably a pretty dedicated fan, so I wanted to let you know that I truly appreciate your support and encouragement so much. I can’t wait to show you more of the little world we’re making!