Introducing Clomper and Tud (and other stuff) - The July 2018 Devlog

Howdo Ooblets friends! It’s me, Rebecca with another update on all the stuff we’ve been working on. It’s been a super busy month for us making a lot of major improvements to things, but who cares about all that when we’ve got NEW OOBLETS: 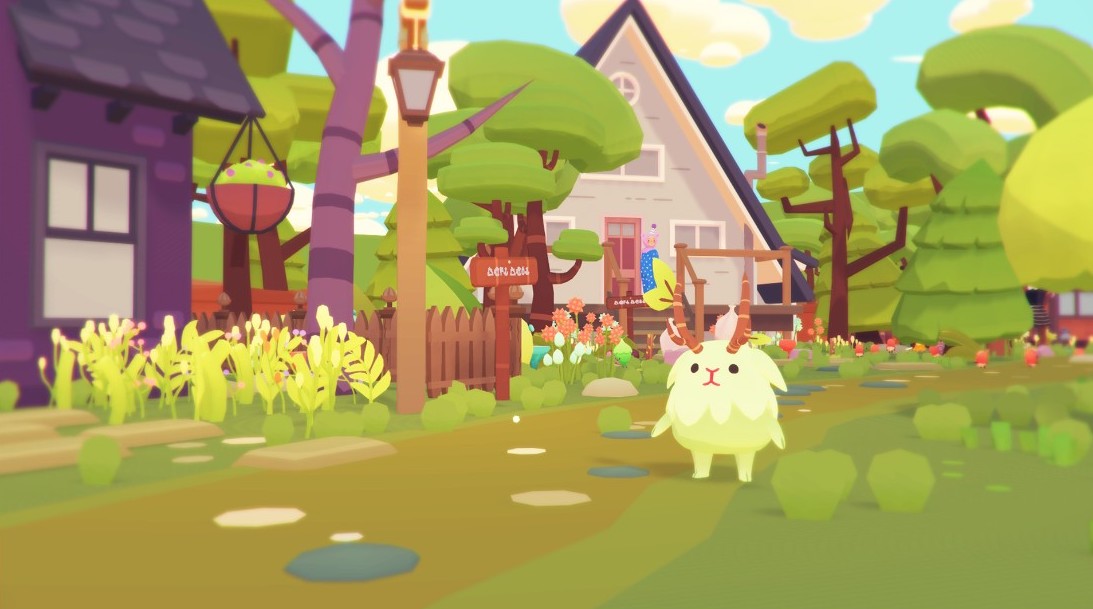 I’m pretty sure Clomper will become a new fan favourite… It was designed by our lovely friend Miski and modeled by our other lovely friend Sander. I picked the name and added the tail wag…

Tud is another Miski concept and Sander model and we hope you like it, too. 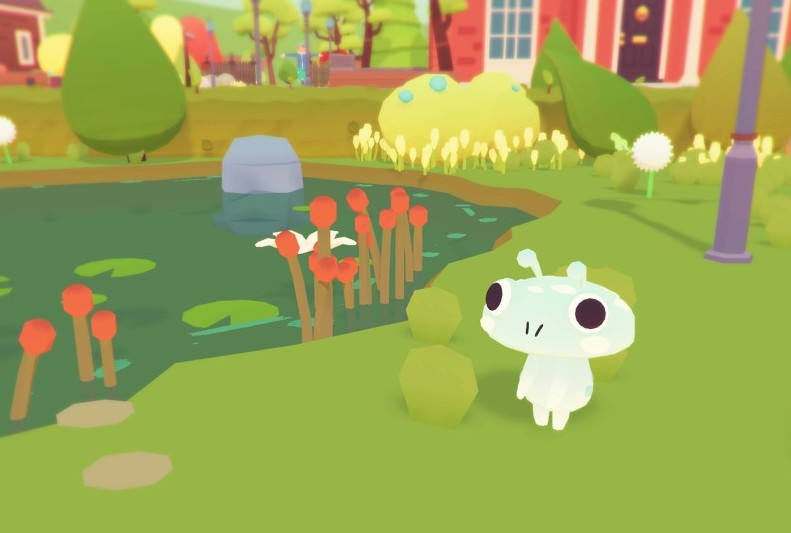 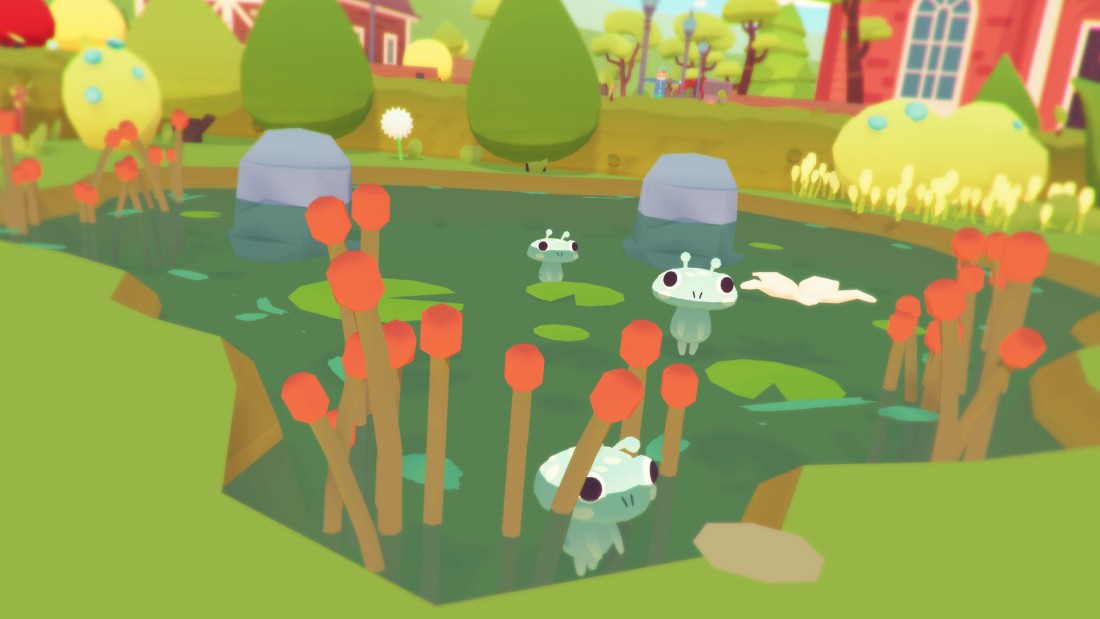 If you’re not familiar with it, the grumboire is the name of our main UI system. It was originally just a set of flat solid UI panels, but I’ve been working on making it more skeuomorphic this month. 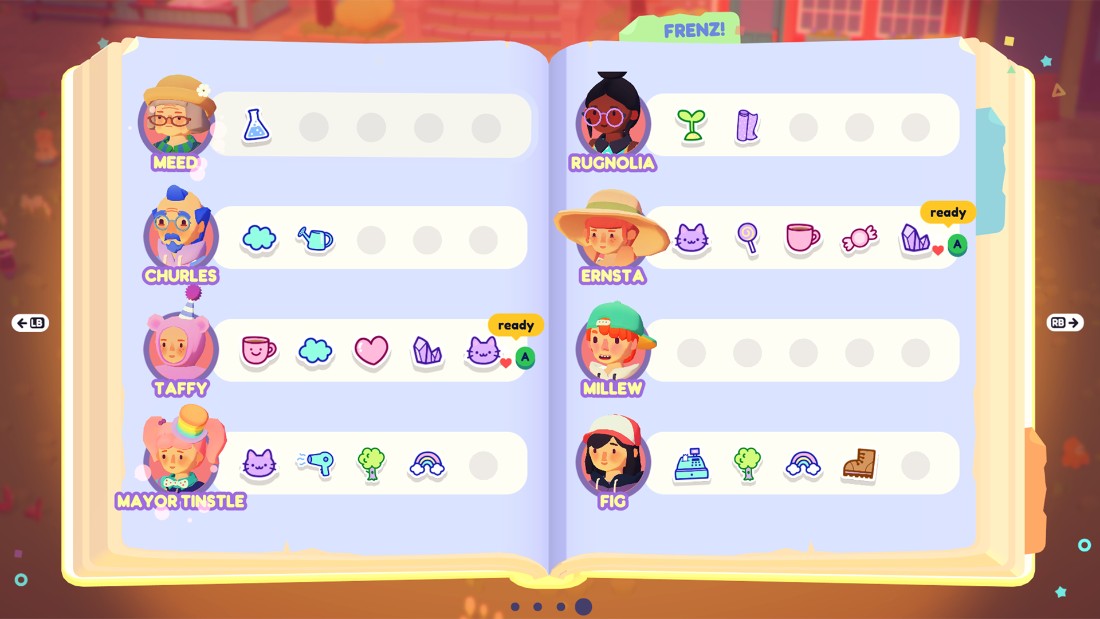 The inventory and followbaby (your team) UI have been separate from the grumboire for some reason so this past month I’ve been consolidating all that into it.

There’s still a bunch of improvements and changes I need to make on these pages but it’s getting there.

I’ll probably end up doing a more in-depth post about this once it’s further along, but I spent the majority of the month making big improvements to the combat gameplay.

We switched out cool-downs for action points and added in an element of randomization for what moves are available each turn. It’s way more fun, fast, and intuitive now. I’ll have screenies of it once it’s polished up a bit. 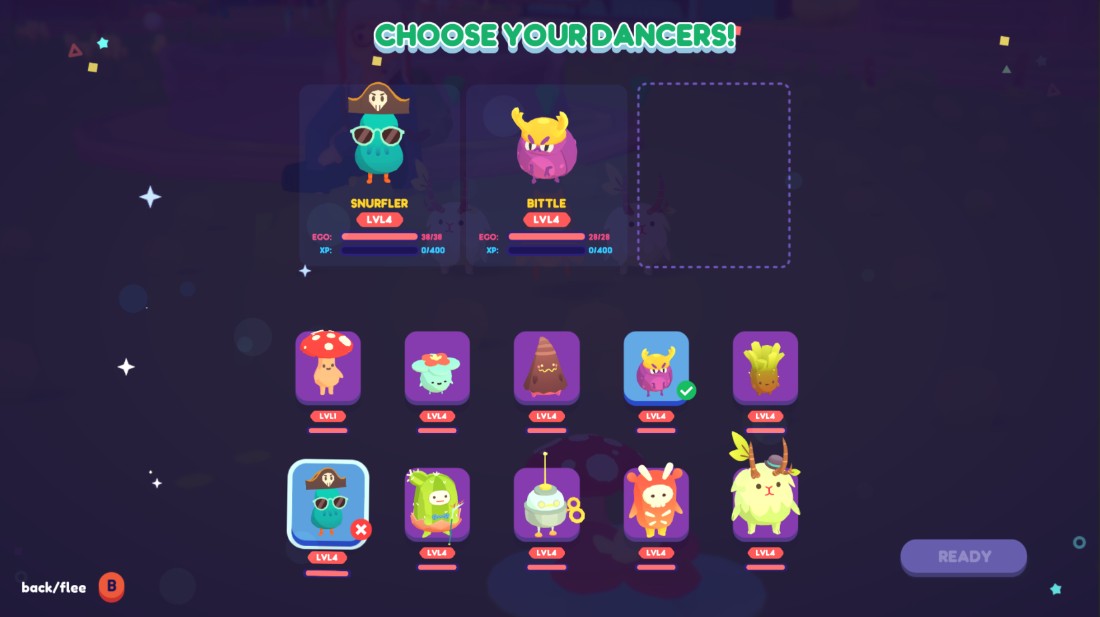 I also did a lot of work fixing up the UI for choosing which ooblets to take into a dance-off because the previous version seemed to confuse everyone.

One of our big goals in designing the game is to limit players’ stress, and our first version of player energy didn’t really accomplish that. Your energy meter would go down over time and if you ran out, you’d pass out and wake up at the police station… Kinda stressful.

We decided to try a more traditional route and switch that all over to actions having energy costs which deplete your meter. If you run out of energy you just can’t do any more actions that have energy costs, but you can still walk around.

Days don’t end at a specific time, though, so it’s possible to end up with a totally goofy schedule. We don’t think that will be a big problem but we’re still playing around with it. 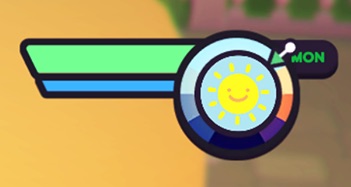 In another big change, we’ve been testing out switching the NPC dialogue UX from a camera-shift full screen sorta dealie to a less invasive pop up. 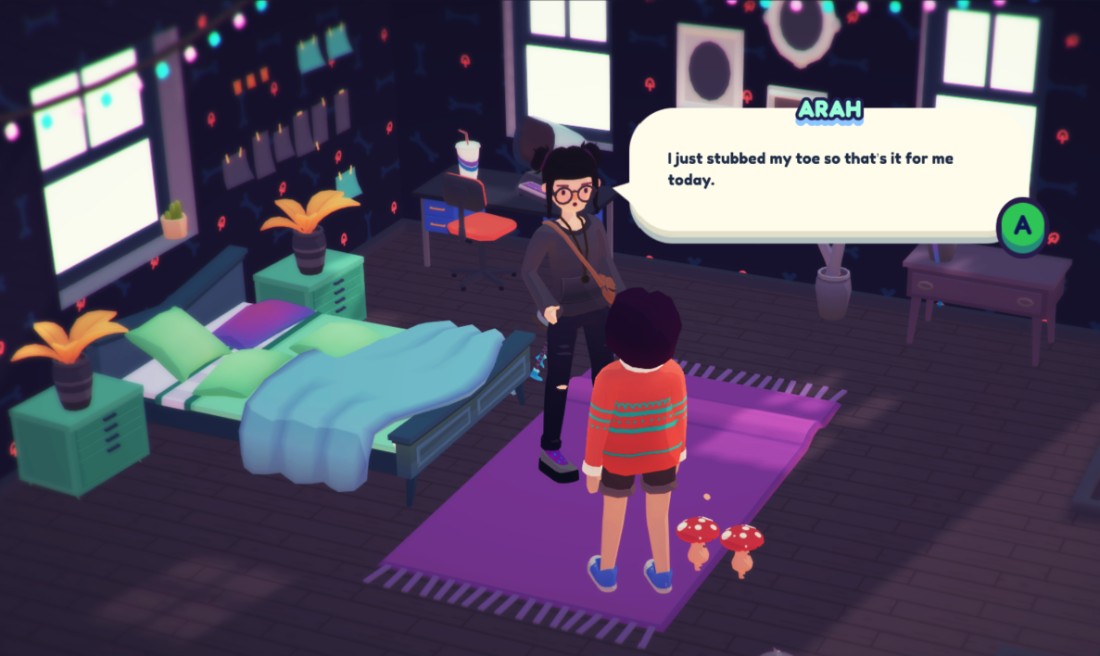 Compare that to the previous version:

I think it feels a bit more streamlined and less of an investment to players to see the chat bubble in the normal camera view when they engage with the NPCs. Let me know (through Twitter/Patreon replies) which one you prefer, though.

I made some changes to the post-processing so colours are now more vibrant. 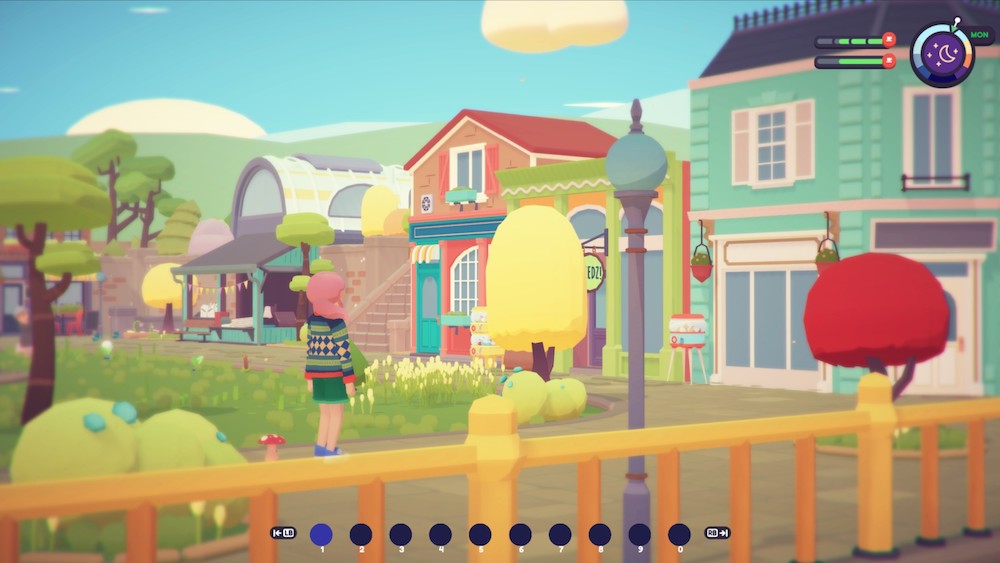 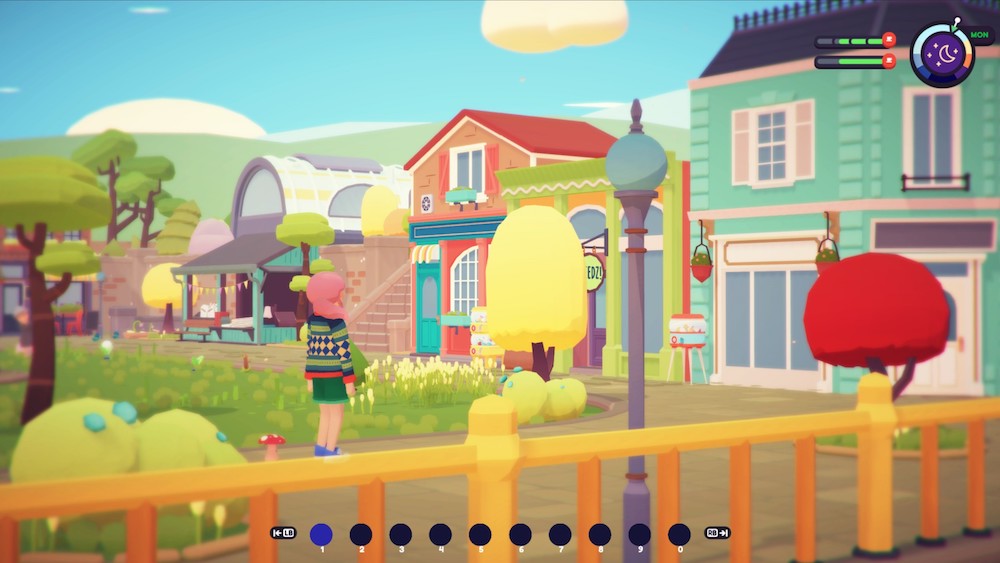 Here’s a gif of the switch (watch it for a few seconds):

It looks a bit subtle through consecutive screenshots or colour-lossy gifs, but in-game when it’s toggled it’s a huge difference. JUST TRUST ME.

The player starter house has gone through a lot of changes throughout development and this month I made some more big changes. 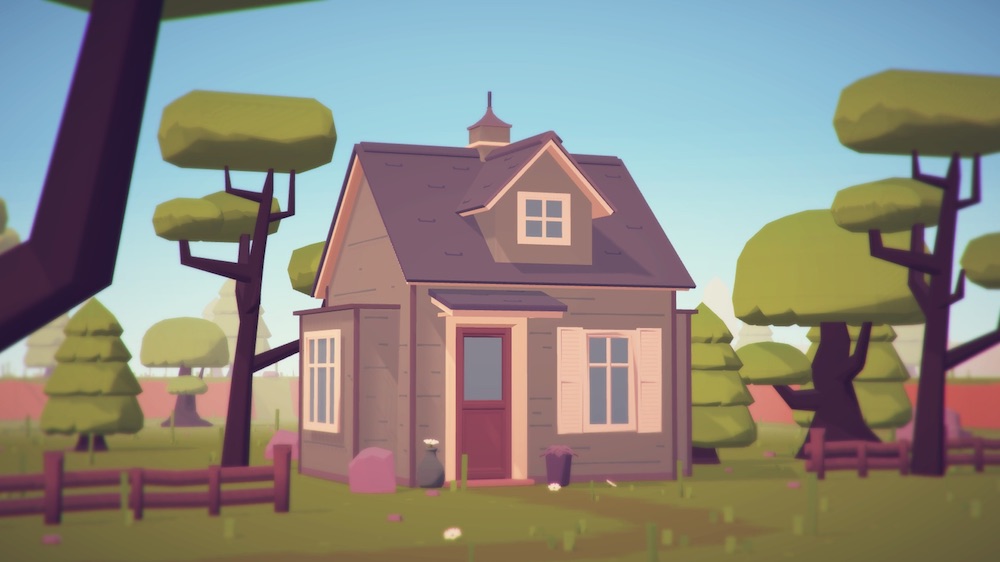 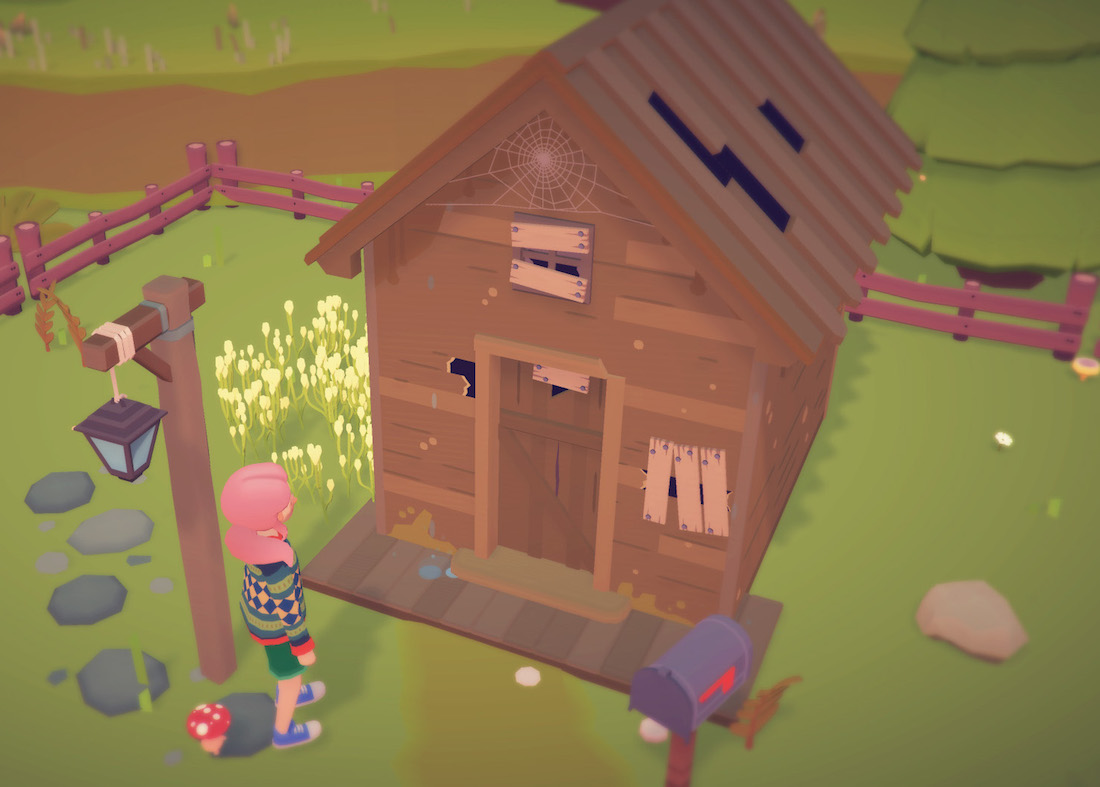 Our plan is to have you fix up your shack when you first start the game before you can start decorating and expanding it, so it needed to look like it was in need of fixing up.

We’ve had a lot more people asking about the release date, and I didn’t want to leave you all in the dark. We still don’t have a great idea of when we’ll be ready, but our goals are still the same (i.e. get the game out as soon as we can!).

A 2018 launch might be a bit overly-ambitious so I hope you all stick by us until the game is ready, whenever that is. We’d rather disappoint you with a delay than a poopy game!